The Panoradio is a tech-demo for modern software defined radio (SDR), that shows what is possible with today’s technology in AD conversion, signal processing and digital hardware.

The Panoradio SDR receiver directly samples the RF signal with a high performance 16 bit AD converter running at 250 MHz. Thus it has a very wide instantaneous bandwidth: It captures and displays all signals from 0-100 MHz simultaneously and can even receive signals in the 70 cm band with undersampling. Signal processing is almost exclusively implemented in the digital domain using steep filters, wide internal bitwidths, and a Weaver SSB demodulator for excellent performance. The digital hardware platform is a Xilinx Zynq, a state-of-the-art embedded SoC (System on Chip). The SoC combines a FPGA with an ARM A9 dual core processor on a single chip and runs a Linux operating system.

The radio’s features at a glance:

The Panoradio is an open source project, the design files are available from the download section.

The inside view shows the Zedboard (green) and the ADC board (blue) with the anti-aliasing filter being in the lengthy metal case on the left. In the upper right the relays for switching and their control circuit can be seen. The squared metal box contains the 70 cm frontend. Because of the large heat dissipation of the AD converter a fan is mounted at the front panel.

The Panoradio has three SMA antenna inputs for the 100 bandwidth MHz mode, the direct path and the 70 cm mode. The front panel provides access to HDMI, Ethernet, Audio jacks, USB and the programming interfaces.

I have presented the Panoradio at the Software Defined Radio Academy (SDRA) at the Ham Radio in 2015 and 2016 in Friedrichshafen, Germany. The videos are available on the SDRA Youtube channel:

The Zedboard: A Modern “System On Chip” for SDRs (2015), Youtube Presentation

The Panoradio was on the cover of the December/November 2017 edition of the QEX magazine:

About the Cover: DC9ST describes a direct sampling Panoradio software defined receiver that captures up to 100 MHz bandwidth at once and provides an extra-wide panorama view seamlessly from dc to VHF. The Panoradio has a second band pass filtered front end to enable undersampling reception of the 70 centimeter band. 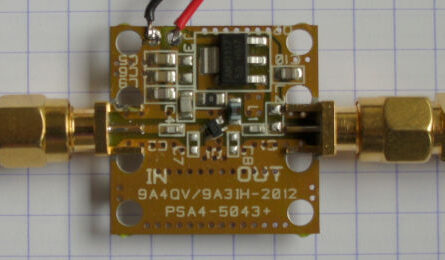